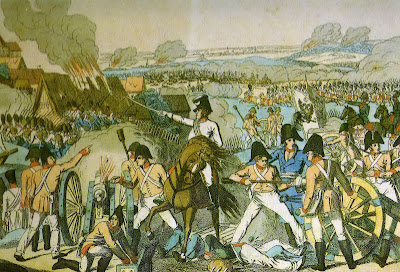 The battle of Leipzig was fought over the period 14-19 October 1813. It started with the largest cavalry battle in history, fought at Libertwolkwitz, followed by Wachau, Connewitz, Lindenau, Mockern and finally Leipzig itself. 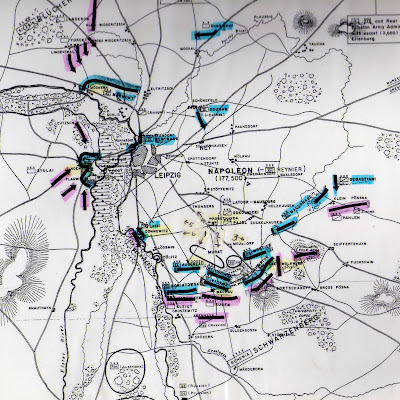 I have always found Leipzig to be one of the most difficult of all Napoleonic battles to grasp. The size of the battlefield, the armies involved, the number of combats within the battle all make it hard to understand. In preparation for this visit we did a lot of research, read a lot of books and prepared a lot of maps. Despite all of this preparation, the actual visit turned out to be a disappointment

Our day on the battlefield started to the north of the city, where we visited the area around Mockern (centre of photo). This would have been the Blucher’s view as he approached Leipzig.

Our next site was a park near the battle memorial in Probstheyda. This photo was taken looking towards the city centre.

It was here that it became obvious that either our guide had not done sufficient preparation, or else that the city had grown so much that it was not possible to find suitable locations to follow the course of the battle. Despite my own preparation I found it difficult to follow his attempts explain the battle. 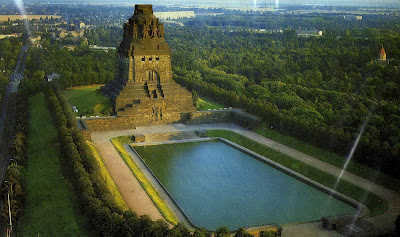 Next we visited the huge monument to the Battle of the Nations, built in 1913 and located in the southern part of the city. The monument dominates the city skyline, and the sheer size makes it one of the most impressive I have visited. The views which follow have all been taken from the viewing platform.

The road in the centre leads to Wachau

The radio tower is in Libertwolkwitz, the scene of the cavalry battle.

Looking north towards Mockern, the scene of bitter fighting with the Prussian army of Blucher

Connewitz was the scene of bitter fighting for the bridge over the river Pleisse, where the newly promoted Marshal Poniatowski would lose his life in the closing hours of the battle. 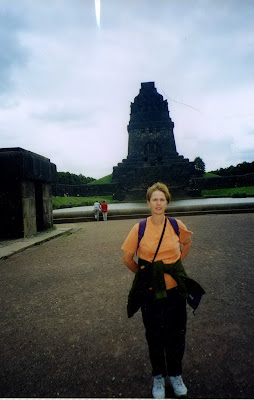 The hour spent here at the monument was well spent, but by lunchtime we had completed the guided tour of the battlefield. After a long lunch we had a “free afternoon” to explore Leipzig. To my mind this was a waste of time, and I would have loved to spend the time exploring the battlefield. Instead we passed the time looking walking around the shops. A disappointing end to our visit to Napoleon’s German battlefields.
Posted by paul leniston at 3:40 PM

Email ThisBlogThis!Share to TwitterShare to FacebookShare to Pinterest
Labels: 07 - Leipzig